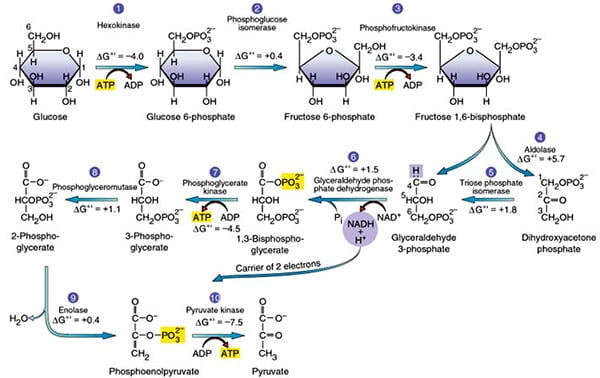 Glycolysis is the metabolic process that serves as the foundation for both aerobic and anaerobic cellular respiration. In glycolysis, glucose is converted into pyruvate. Glucose is a six- memebered ring molecule found in the blood and is usually a result of the breakdown of carbohydrates into sugars. It enters cells through specific transporter proteins that move it from outside the cell into the cell’s cytosol. All of the glycolytic enzymes are found in the cytosol.

The overall reaction of glycolysis which occurs in the cytoplasm is represented simply as:

The first step in glycolysis is the conversion of D-glucose into glucose-6-phosphate. The enzyme that catalyzes this reaction is hexokinase.

Here, the glucose ring is phosphorylated. Phosphorylation is the process of adding a phosphate group to a molecule derived from ATP. As a result, at this point in glycolysis, 1 molecule of ATP has been consumed.

The reaction occurs with the help of the enzyme hexokinase, an enzyme that catalyzes the phosphorylation of many six-membered glucose-like ring structures. Atomic magnesium (Mg) is also involved to help shield the negative charges from the phosphate groups on the ATP molecule. The result of this phosphorylation is a molecule called glucose-6-phosphate (G6P), thusly called because the 6′ carbon of the glucose acquires the phosphate group.

Phosphofructokinase, with magnesium as a cofactor, changes fructose 6-phosphate into fructose 1,6-bisphosphate.

In the third step of glycolysis, fructose-6-phosphate is converted to fructose- 1,6-bisphosphate (FBP). Similar to the reaction that occurs in step 1 of glycolysis, a second molecule of ATP provides the phosphate group that is added on to the F6P molecule.

The enzyme that catalyzes this reaction is phosphofructokinase (PFK). As in step 1, a magnesium atom is involved to help shield negative charges.

The enzyme Aldolase splits fructose 1, 6-bisphosphate into two sugars that are isomers of each other. These two sugars are dihydroxyacetone phosphate  (DHAP) and glyceraldehyde 3-phosphate (GAP).

This step utilizes the enzyme aldolase, which catalyzes the cleavage of FBP to yield two 3-carbon molecules. One of these molecules is called glyceraldehyde-3-phosphate (GAP) and the other is called dihydroxyacetone phosphate (DHAP).

GAP is the only molecule that continues in the glycolytic pathway. As a result, all of the DHAP molecules produced are further acted on by the enzyme Triosephosphate isomerase (TIM), which reorganizes the DHAP into GAP so it can continue in glycolysis. At this point in the glycolytic pathway, we have two 3-carbon molecules, but have not yet fully converted glucose into pyruvate.

The enzyme GAPDH contains appropriate structures and holds the molecule in a conformation such that it allows the NAD molecule to pull a hydrogen off the GAP, converting the NAD to NADH. The phosphate group then attacks the GAP molecule and releases it from the enzyme to yield 1,3 bisphoglycerate, NADH, and a hydrogen atom.

Again, we see that an atom of magnesium is involved to shield the negative charges on the phosphate groups of the ATP molecule.

The reaction mechanism proceeds by first adding an additional phosphate group to the 2′ position of the 3 phosphoglycerate. The enzyme then removes the phosphate from the 3′ position leaving just the 2′ phosphate, and thus yielding 2 phsophoglycerate. In this way, the enzyme is also restored to its original, phosphorylated state.

The enzyme enolase removes a molecule of water from 2-phosphoglycerate to form phosphoenolpyruvic acid (PEP).

This step involves the conversion of 2 phosphoglycerate to phosphoenolpyruvate (PEP). The reaction is catalyzed by the enzyme enolase. Enolase works by removing a water group, or dehydrating the 2 phosphoglycerate. The specificity of the enzyme pocket allows for the reaction to occur through a series of steps too complicated to cover here.

The enzyme pyruvate kinase transfers a P from phosphoenolpyruvate (PEP) to ADP to form pyruvic acid and ATP Result in step 10.

The final step of glycolysis converts phosphoenolpyruvate into pyruvate with the help of the enzyme pyruvate kinase. As the enzyme’s name suggests, this reaction involves the transfer of a phosphate group. The phosphate group attached to the 2′ carbon of the PEP is transferred to a molecule of ADP, yielding ATP. Again, since there are two molecules of PEP, here we actually generate 2 ATP molecules.