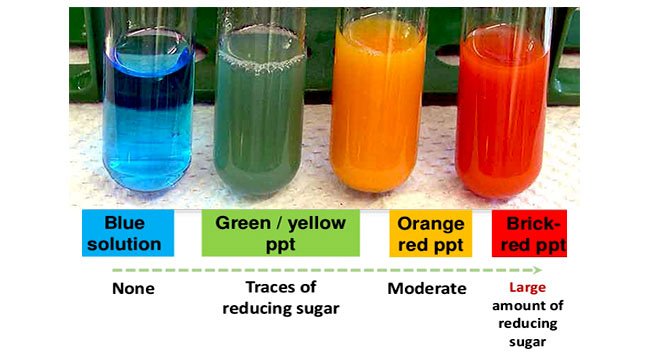 Some sugars such as glucose are called reducing sugars because they are capable of transferring hydrogens (electrons) to other compounds, a process called reduction. When reducing sugars are mixed with Benedicts reagent and heated, a reduction reaction causes the Benedicts reagent to change color. The color varies from green to dark red (brick) or rusty-brown, depending on the amount of and type of sugar.

Benedict’s quantitative reagent contains potassium thiocyanate and is used to determine how much reducing sugar is present. This solution forms a copper thiocyanate precipitate which is white and can be used in a titration. The titration should be repeated with 1% glucose solution instead of the sample for calibration

Sodium carbonate provides the alkaline conditions which are required for the redox reaction. Sodium citrate complexes with the copper (II) ions so that they do not deteriorate to copper(I) ions during storage.

Complex carbohydrates such as starches DO NOT react positive with the Benedict’s test unless they are broken down through heating or digestion (try chewing crackers and then doing the test). Table sugar (disaccharide) is a non-reducing sugar and does also not react with the iodine or with the Benedict Reagent. Sugar needs to be decomposed into its components glucose and fructose then the glucose test would be positive but the starch test would still be negative.

Composition and Preparation of Benedict’s Solution

Benedict’s solution is a deep-blue alkaline solution used to test for the presence of the aldehyde functional group, – CHO.

One litre of Benedict’s solution can be prepared from 100 g of anhydrous sodium carbonate, 173 g of sodium citrate and 17.3 g of copper(II) sulfate pentahydrate.