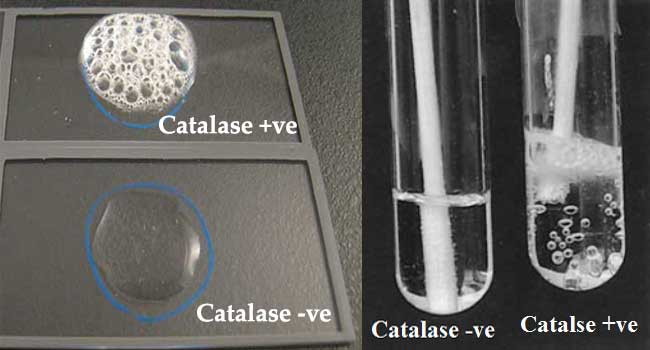 This test demonstrate the presence of catalase, an enzyme that catalyses the release of oxygen from hydrogen peroxide (H2O2). It is used to differentiate those bacteria that produces an enzyme catalase, such as staphylococci, from non-catalase producing bacteria such as streptococci. Normally 3% H2O2 is used for the routine culture while 15% H2O2 is used for detection of catalase in anaerobes.

The enzyme catalase mediates the breakdown of hydrogen peroxide into oxygen and water. The presence of the enzyme in a bacterial isolate is evident when a small inoculum is introduced into hydrogen peroxide, and the rapid elaboration of oxygen bubbles occurs. The lack of catalase is evident by a lack of or weak bubble production. The culture should not be more than 24 hours old.

Bacteria thereby protect themselves from the lethal effect of Hydrogen peroxide which is accumulated as an end product of aerobic carbohydrate metabolism.

Purpose or Uses of Catalase Test