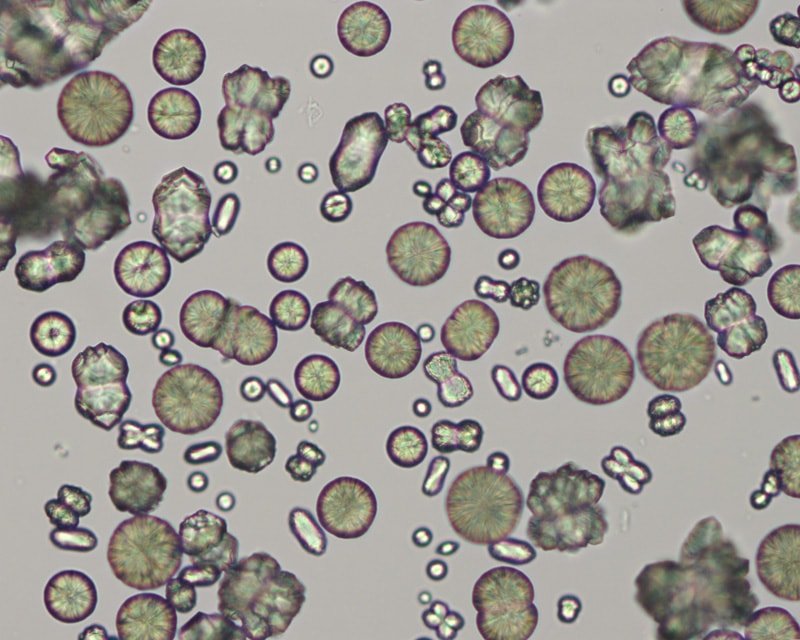 Uric acid crystals invariably form in acidic urine, typically with a urine pH < 5.5. Uric acid is soluble in alkaline urine, preventing the precipitation of urate crystals. The inability of uric acid to crystallize at urine pH > 7.0 is the rationale for urinary alkalinization in patients at risk for acute uric acid nephropathy. Uric acid crystalluria is not associated with significant amounts of hematuria, glycosuria or proteinuria.

Although crystals can be seen in certain clinical scenarios, such as kidney stone disease or acute crystal nephropathy, visualizing crystals under the microscope does not guarantee that the crystals were present in the urinary system. Crystals can continue to form after micturition. Crystal precipitation after micturition is most commonly due to changes in temperature, as can occur if the urine is stored at room temperature or in a refrigerator, or changes in urinary pH, as can occur in the presence of infection due to urea-splitting organisms.

Uric acid crystals can vary in both size and shape, as can be seen in the slide above. They can look like barrels, rosettes, rhomboids, needles or hexagonal plates. They are usually amber in color, irrespective of the size or shape of the individual crystal. However, urate crystals may assume the color of any pigments (such as bilirubin or the medication pyridium) that are present in the urine. Urate crystals can occasionally be seen in normal subjects, although they are much more common in patients with urate nephrolithiasis or acute urate nephropathy.

Calcium carbonate crystals are variably sized crystals that frequently appear as large spheroids with radial striations. They can also be seen as smaller crystals with round to ovoid shapes. they are colorless to yellow-brown and can impart a brownish tinge to the urine, when they occur in high numbers. They are usually large crystals and can be readily observed at low magnification (however, confirmation of crystal identity should always be performed under high magnification and smaller variants of calcium carbonate may be missed if only low magnification is used). These crystals are common in the urine of normal horses, rabbits, guinea pigs and goats. They have not been observed in canine or feline urine.

“Amorphous” crystals appear as aggregates of finely granular material without any defining shape at the light microscopic level. They can be comprised of urates, phosphates or xanthine. They are usually small crystals that are usually only observed at high magnification (unless there are large amounts of them), i.e. they mimic bacteria.

Amorphous urates (Na, K, Mg, or Ca salts) tend to form in acidic urine and may have a yellow or yellow-brown color, rhomboid. Amorphous phosphates are similar in general appearance, but tend to form in alkaline urine and lack color and are Coffin-lid shape. Xanthine crystals are usually in the form of “amorphous” crystals. These crystals occur in Dalmations on allopurinol therapy for urate urolithiasis. Generally, no specific clinical interpretation can be made based on the finding of amorphous crystals. Small amorphous crystals can be confused with bacterial cocci in some cases, but can be distinguished by gram-staining. Degenerating crystals or cells can also resemble “amorphous” crystals.

Ammonium urate (or biurate) crystals generally appear as brown or yellow-brown spherical bodies with irregular protrusions (“thorn-apples”). In some urine samples, they do not have irregular protrusions but have smooth borders and can resemble calcium carbonate (although these do not occur in the urine from dogs and cats). These crystals can be observed under low magnification, particularly when seen in large number, however low numbers may only be seen at higher magnification. Due to their potential pathologic relevance, crystal identification should be verified by examination at high magnification. Though possible in urine of any pH, their formation is favored in neutral to alkaline urine. They are frequently seen with amorphous urates. These crystals are fairly common in dogs and cats with congenital or acquired portal vascular anomalies, with or without concomitant ammonium urate uroliths. They can be seen in urine from normal Dalmatians and Bulldogs, both of which .are predisposed to urate urolithiasis. They are rarely, if ever, seen in urine from normal cats or dogs of other breeds and have not been reported in large animals.

Bilirubin crystals form from conjugated bilirubin (water soluble) and are needle-like to granular crystals that are yellow in color. They tend to precipitate onto other formed elements in the urine. In the top picture, fine needle-like crystals have formed on an underlying cell. This is the most common appearance of bilirubin crystals. In the lower two pictures, cylindrical bilirubin crystals have formed in association with droplets of fat, resulting in a “flashlight” appearance. This form is less commonly seen. They are usually small crystals that are usually only observed at high magnification (unless there are large aggregates of crystals). Bilirubin crystals are seen most commonly in canine urine, especially in highly concentrated specimens. They are less common in urine of other species. In dogs, they often are of no clinical significance (healthy dogs can have low, but detectable, bilirubin levels in urine). Bilirubin crystals (or a positive chemical reaction on the urine dipstick) in feline, equine, bovine, or camelid urine is an abnormal finding and the animal should be investigated for an underlying cholestatic process.

Urinary crystals can also be seen in patients taking certain medications. One example is sulfadiazine: these crystals appear as striated shells or “shocks of wheat.“ A sulfadiazine crystal is shown on the left. Other medications that can cause urine crystals to form include indinavir, intravenous acyclovir, and triamterene. When these medications are given in high doses or to volume depleted patients, the crystals can cause acute renal failure by crystalline blockage of the renal tubules. An example of an indinavir crystal is shown on the right: the top panel shows rectangular plates of various sizes containing needle crystals, while the bottom panel shows indinavir crystals in a sheaf of numerous, densely packed needles.

31 thoughts on “Types of Crystals in Urine”