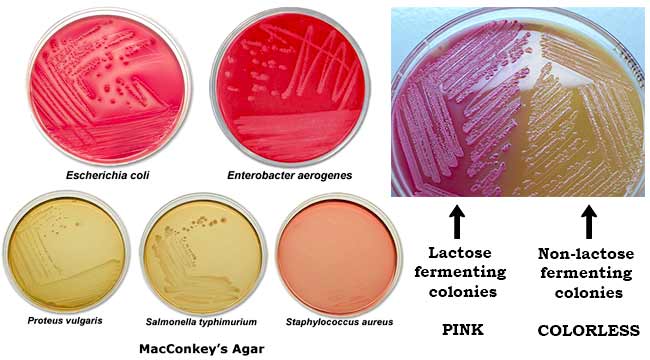 MacConkey agar is used for the isolation of gram-negative enteric bacteria and the differentiation of lactose fermenting from lactose non-fermenting gram-negative bacteria. Pancreatic digest of gelatin and peptones (meat and casein) provide the essential nutrients, vitamins and nitrogenous factors required for growth of microorganisms. Lactose monohydrate is the fermentable source of carbohydrate. The selective action of this medium is attributed to crystal violet and bile salts, which are inhibitory to most species of gram-positive bacteria. Sodium chloride maintains the osmotic balance in the medium. Neutral red is a pH indicator that turns red at a pH below 6.8 and is colorless at any pH greater than 6.8. Agar is the solidifying agent.

Lactose fermenting strains grow as red or pink and may be surrounded by a zone of acid precipitated bile. The red color is due to production of acid from lactose, absorption of neutral red and a subsequent color change of the dye when the pH of medium falls below 6.8.

Lactose non-fermenting strains, such as Shigella and Salmonella are colorless and transparent and typically do not alter appearance of the medium. Yersinia enterocolitica may appear as small, non-lactose fermenting colonies after incubation at room temperature.