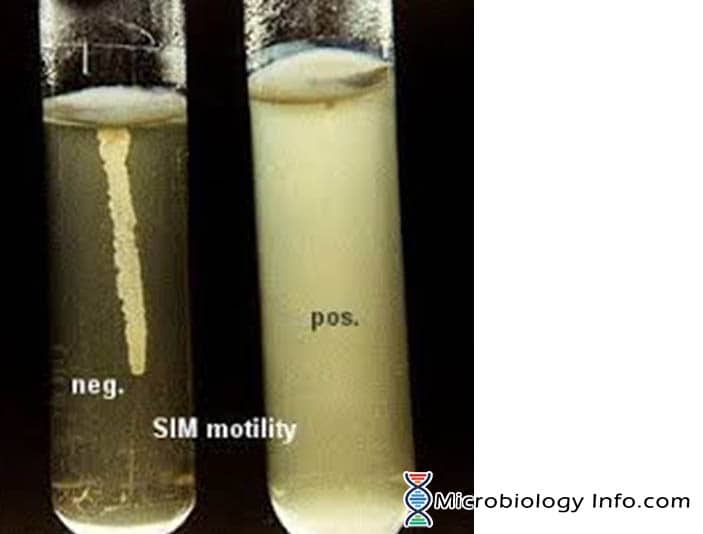 Motility is the ability of an organism to move by itself by means of propeller-like flagella unique to bacteria or by special fibrils that produce a gliding form of motility. Motile  bacteria  move  using   flagella, thread like  locomotor  appendages  extending  outward  from  the plasma membrane and cell wall either single flagellum or multiple flagella. Motility has long been recognized as an important taxonomic tool and biological characteristic of microorganisms. The presence of flagella occurs primarily in bacilli but there are a few flagellated cocci, thus motility is a very important means of identification in the family Enterobacteriaceae. From the early days in the field of microbiology, the ability of bacteria to move has been used as a means of differentiation and classification of organisms.

Motility by bacterium is mostly demonstrated in a semi solid agar medium. In semi-solid agar media, motile bacteria ‘swarm’ and give a diffuse spreading growth that is easily recognized by the naked eye.The medium mainly used for this purpose is SIM medium (Sulphide Indole Motility medium) which is a combination differential medium that tests three different parameters, Sulfur Reduction, Indole Production and Motility. This media has a very soft consistency that allows motile bacteria to migrate readily through them causing cloudiness. The inoculum is stabbed into the center of a semisolid agar deep. Bacterial motility is evident by a diffuse zone of growth extending out from the line of inoculation. Some organisms grow throughout the entire medium, whereas others show small areas or nodules that grow out from the line of inoculation. The non-motile bacteria will only grow in the soft agar tube and only the area where they are inoculated.