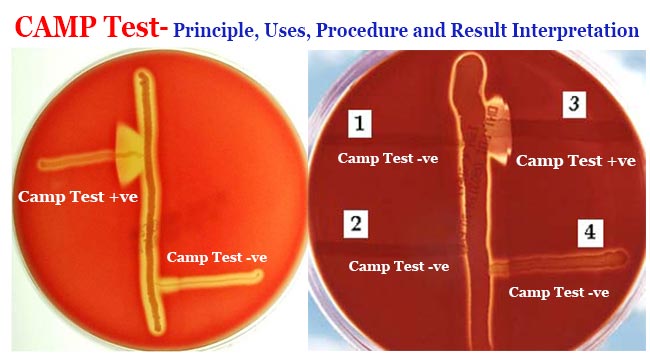 CAMP test is used to distinguish the species Streptococcus agalactiae from other species of beta-hemolytic Streptococcus. S. agalactiae, a member of the Lancefield Group B streptococci, is one of the causative agents of mastitis in cows. CAMP is an acronym for the authors of this test (Christie, Atkinson, Munch, and Peterson) which was identified in 1944.

Certain organisms (including group B streptococci) produce a diffusible extracellular hemolytic heat-stable protein (CAMP factor) that acts synergistically with the beta-lysin of Staphylococcus aureus to cause enhanced lysis of red blood cells. The group B streptococci are streaked perpendicular to a streak of S. aureus on sheep blood agar. A positive reaction appears as an arrowhead zone of hemolysis adjacent to the place where the two streak lines come into proximity.

The hemolytic activity of the beta-hemolysin produced by most strains of Staphylococcus aureus is enhanced by extracellular protein produced by group B streptococci. Interaction of the beta-hemolysin with this factor causes “synergistic hemolysis,” which is easily observed on a blood agar plate. This phenomenon is seen with both hemolytic and non-hemolytic isolates of group B streptococci.

Positive: Enhanced hemolysis is indicated by an arrow head-shaped zone of beta-hemolysis at the junction of the two organisms.

Negative: No enhancement of hemolysis.