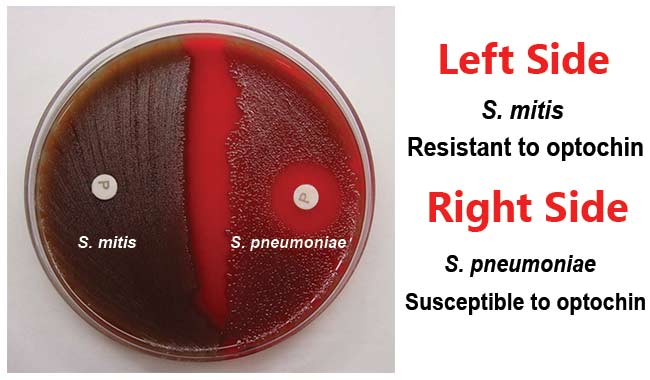 Although optochin susceptibility was first described for differentiating pneumococci from other α-hemolytic streptococci in 1915, the test was virtually unused by laboratories until the mid-1950s.

Optochin is a chemical, ethylhydrocupreine hydrochloride and is completely soluble in water. It is useful in the identification of Streptococcus pneumoniae, the alpha-hemolytic Streptococcus most commonly susceptible to this chemical. Other alpha-hemolytic streptococcal species are optochin-resistant. This test determines whether the bacterium is either sensitive (susceptible) to optochin or resistant to the chemical.

The optochin test is widely used in the form of filter paper discs, impregnated with ethylhydrocupreine hydrochloride, which are applied directly to inoculated plates before incubation. The optochin test is less time-consuming than the bile solubility test.

To determine the effect of Optochin (ethyl hydrocupreine hydrochloride) on test organism.

A positive presumptive identification of S. pneumoniae is made when a well defined zone of inhibition results around the impregnated disk. Other alpha-hemolytic streptococci do not display this clear zone of inhibition when in the presence of optochin. The chemical tests the fragility of the bacterial cell membrane and causes S. pneumoniae to lyse due to changes in surface tension.

A presumptive identification for S. pneumoniae can be made if the alpha-hemolytic colony produces a zone of inhibition of 14mm or greater around the disk. Organisms producing smaller zone sizes should be tested for bile solubility. Organisms with questionable zone sizes (6-14mm) around the disk should be presumptively identified as a pneumococci only if it is bile soluble.

Positive Test: Zone of inhibition is 14 mm or greater in diameter with 6 mm disk.