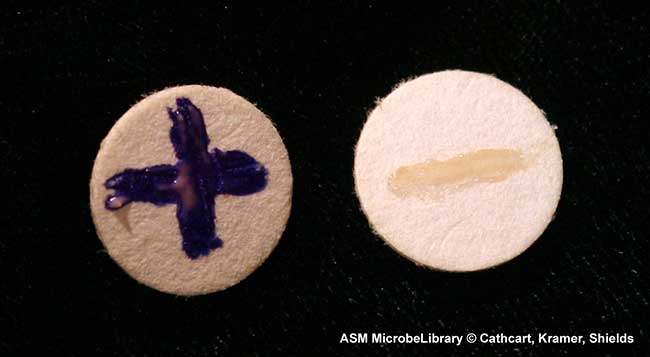 The oxidase test detects the presence of a cytochrome oxidase system that will catalyse the transport of electrons between electron donors in the bacteria and a redox dye- tetramethyl-p-phenylene-diamine. The dye is reduced to deep purple color. This test is used to assist in the identification of Pseudomonas, Neisseria, Alcaligens, Aeromonas, Campylobacter, Vibrio, Brucella and Pasteurella, all of which produce the enzyme cytochrome oxidase.

A number of reagents can be used for this test.

The cytochrome system is usually only present in aerobic organisms which are capable of utilising oxygen as the final hydrogen receptor. The end product of this metabolism is either water or hydrogen peroxide (broken down by catalase).

There are many method variations to the oxidase test. These include, but are not limited to, the filter paper test, direct plate method, swab method, impregnated oxidase test strip method and test tube method. All times and concentrations are based upon the original recommendations.

Since the oxidase reagent is unstable and has to be freshly prepared for use, this method is convenient.

Note: The Direct Plate method should be carried out on a non-selective agar plate.