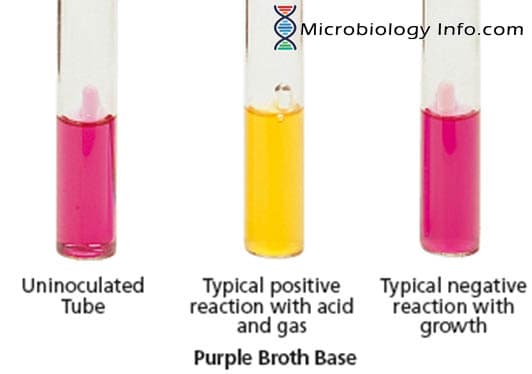 The ability of bacteria to form organic compounds by metabolizing certain carbohydrates and related compounds is a widely used method for the identification of microorganisms. Different fermentation media are used to differentiate organisms based on their ability to ferment carbohydrates incorporated into the basal medium.

Purple Broth is used for studying carbohydrate fermentation reactions, particularly in the identification of gram-negative enteric bacteria with desired carbohydrates added. Purple media were originally formulated by Vera. This medium is recommended by FDA for fermentation studies of sugars.

The purple broth consists of peptone with the pH indicator bromcresol purple. Specific carbohydrates are added in a concentration of 0.5-1%. This concentration is recommended to ensure against depletion of the carbohydrate and reversal of the fermentation reaction. When the media are inoculated with an organism that is able to ferment the carbohydrate present, acid or acid and gas are produced. A Durham tube is provided in tubed broth media to collect the gas produced during fermentation. The indicator in the media changes from purple to yellow when the amount of acid produced by carbohydrate fermentation is greater than the alkaline end products from peptone utilization. If the carbohydrate is not fermented, the color will remain unchanged or become more alkaline (darker purple) due to degradation of the amino acids in the medium.