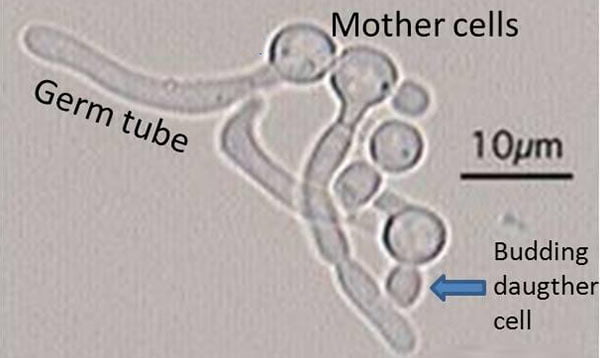 Germ Tube Test is a screening test which is used to differentiate Candida albicans from other yeast. Germ tube (GT) formation was first reported by Reynolds and Braude in 1956. When Candida is grown in human or sheep serum at 37°C for 3 hours, they forms a germ tubes, which can be detected with a wet KOH films as filamentous outgrowth extending from yeast cells. It is positive for Candida albicans and Candida dubliniensis. Approximately 95 – 97% of Candida albicans isolated develop germ tubes when incubated in a proteinaceous media.

Formation of germ tube is associated with increased synthesis of protein and ribonucleic acid. Germ Tube solutions contains tryptic soy broth and fetal bovine serum, essential nutrients for protein synthesis. It is lyophilized for stability. Germ tube is one of the virulence factors of Candida albicans. This is a rapid test for the presumptive identification of C. albicans.

Positive Test: A short hyphal (filamentous) extension arising laterally from a yeast cell, with no constriction at the point of origin. Germ tube is half the width and 3 to 4 times the length of the yeast cell and there is no presence of nucleus. Examples: Candida albicans and Candida dubliniensis

Negative Test: No hyphal (filamentous) extension arising from a yeast cell or a short hyphal extension constricted at the point of origin. Examples: C. tropicalis, C. glabrata and other yeasts.