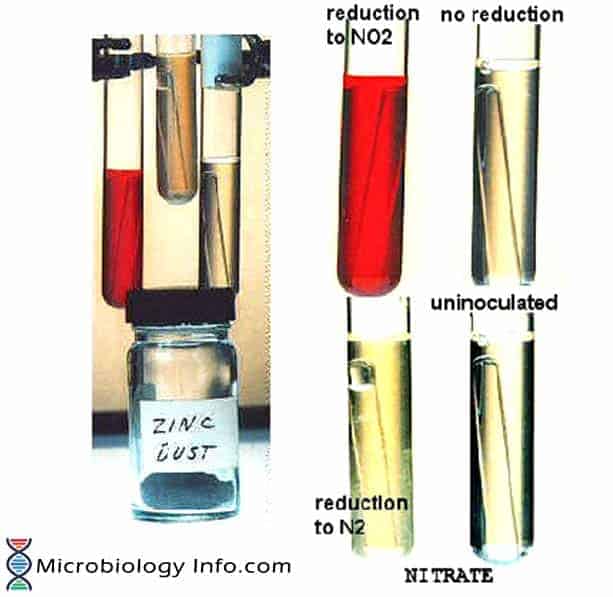 Bacterial species may be differentiated on the basis of their ability to reduce nitrate to nitrite or nitrogenous gases. 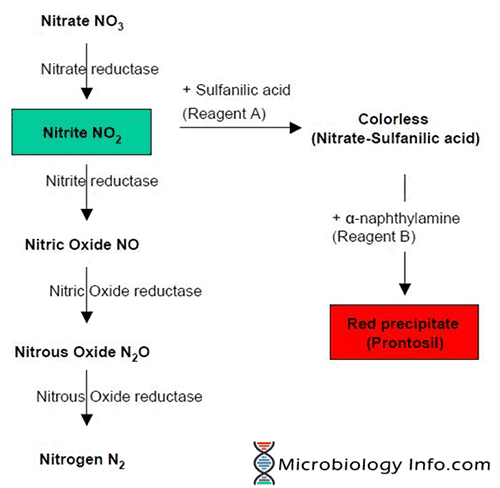 A heavy inoculum of test organism is incubated in a broth containing nitrate. The organisms capable of producing the nitrate reductase enzyme reduce the nitrate, present in the broth, to nitrite which may then be further reduced to nitric oxide, nitrous oxide, or nitrogen.

The nitrate reduction test is based on the detection of nitrite and its ability to form a red compound when it reacts with sulfanilic acid to form a complex (nitrite-sulfanilic acid) which then reacts with a α-naphthylamine to give a red precipitate (prontosil), which is a water-soluble azo dye.

There is two explanations for this observation.

Thus, when nitrite is not detected, it is necessary to test if the organism has reduced nitrate beyond nitrite. This can be done indirectly by adding small amount of Zinc powder to the culture. Zinc powder catalyses the reduction of nitrate to nitrite. The development of the red colour on addition of Zinc indicates that nitrate was not reduced by the organism which suggests that the test organism is not capable of reducing nitrate. If no color change occurs after the addition of zinc, this indicates that the organism reduced nitrate to one of the other nitrogen compounds and thus is a nitrate reducer.

Note: A Durham tube is placed in the nitrogen broth in order to detect deterioration of the broth before inoculation, as evidenced by gas formation in the tube and to identify denitrification by organisms that produce gas by alternate pathways.