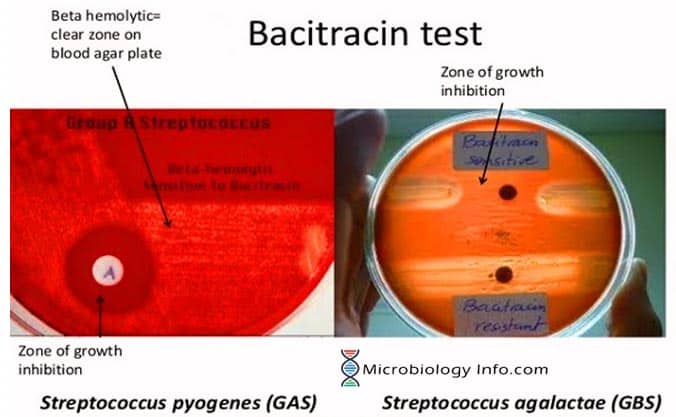 Bacitracin is a polypeptide antibiotic produced by organisms of the licheniformis group of Bacillus subtilis var Tracy.

It is used to determine its effect of a small amount (0.04 IU or 0.05 IU not higher) on different microorganisms. The presumptive identification of beta hemolytic Group A streptococci from beta hemolytic non-Group A Streptococci is usually done by testing for sensitivity to bacitracin.

Many laboratories use this test as the sole test for diagnosing GAS infections due to the difficulty in performing sero-grouping and high cost of antisera.

A disk impregnated with a small amount of bacitracin (0.04 units) is placed on an agar plate, allowing the antibiotic to diffuse into the medium and inhibit the growth of susceptible organisms. After incubation, the inoculated plates are examined for zones of inhibition surrounding the disks.