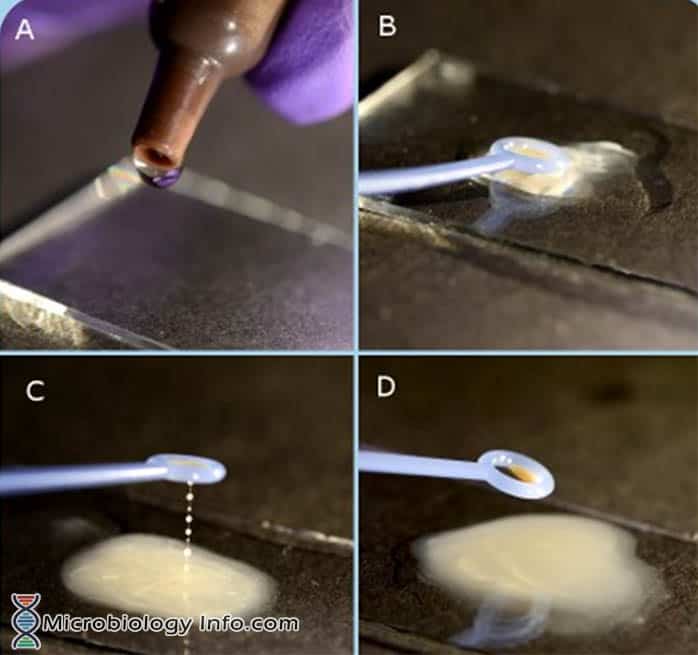 The KOH String Test relies on the differential resistance to 3% potassium hydroxide between gram positive and negative cells, where a portion of a colony is mixed with a small volume of 3% KOH. If the cells lyses, the liberated cellular DNA makes the mixture viscous or “stringy.” The positive string test indicates a gram negative organism. Hence the alternative name for the test is “String Test”.

The potassium hydroxide test may thus aid in differentiation between Gram positive and Gram negative organisms and is a useful complement to the Gram stain and the antibiotic disc test.

To differentiate between Gram negative and Gram positive organisms

Like the Gram stain reaction, the KOH test is based on differences in the chemistry of the bacterial cell wall. In the presence of potassium hydroxide, Gram negative cell walls are broken down. KOH easily dissolves the thin layer of peptidoglycan of the cell walls of gram negative bacteria. Disintergration of gram negative cell wall lyses the cell and release its contents, including the DNA. As a result, a viscid chromosomal material is released which causes the bacterial suspension to become thick and stringy. The viscous and the solution sticks to the loop when touched.

On the other hand, Gram positive bacteria are not affected by KOH, because they have thicker peptidoglycan layer in the cell wall. Thus, the cells are not lysed, the DNA is not released and no viscosity is observed.