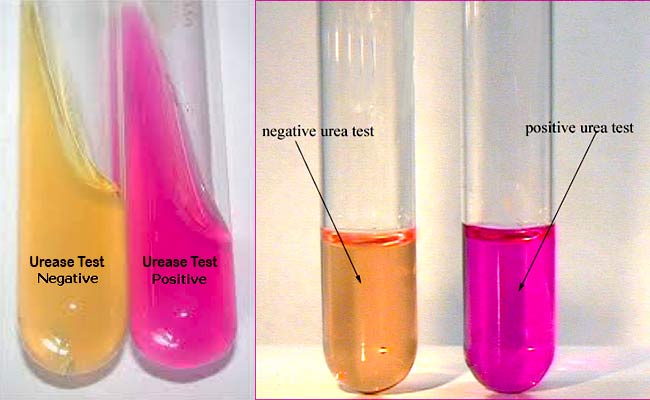 Urea Agar was developed by Christensen in 1946 for the differentiation of enteric bacilli. The urease test is used to determine the ability of an organism to split urea, through the production of the enzyme urease.

Urea is the product of decarboxylation of amino acids. Hydrolysis of urea produces ammonia and CO2. The formation of ammonia alkalinizes the medium, and the pH shift is detected by the color change of phenol red from light orange at pH 6.8 to magenta (pink) at pH 8.1. Rapid urease-positive organisms turn the entire medium pink within 24 hours.

Weakly positive organisms may take several days, and negative organisms produce no color change or yellow as a result of acid production.

The rapid urease test (RUT) is a popular diagnostic test for diagnosis of Helicobacter pylori. It is a rapid, cheap and simple test that detects the presence of urease in or on the gastric mucosa. It is also known as the CLO test (Campylobacter-like organism test). This test uses a procedure called gastric endoscopy and biopsy to collect stomach lining cells.

The test is performed at the time of gastroscopy. A biopsy of mucosa is taken from the antrum of the stomach, and is placed into a medium containing urea and an indicator such as phenol red. The urease produced by H. pylori hydrolyzes urea to ammonia, which raises the pH of the medium, and changes the color of the specimen from yellow (NEGATIVE) to red (POSITIVE).

Urea breath test is a common non-invasive test to detect Helicobacter pylori also based on urease activity. This is highly sensitive and specific test.

Patient ingests radioactively labeled Urea (either radioactive carbon-14 or non-radioactive carbon-13). If infection is present, the urease produced by Helicobacter pylori hydrolyzes the urea to form ammonia and labeled bicarbonate that is exhaled as CO2. The labeled CO2 is detected either by a scintillation counter (Carbon-14) and a isotope ratio mass spectrometry or by mass correlation spectrometry (Carbon-13).

Ingredients per liter of deionized water:*