Antigen is a substances usually protein in nature and sometimes polysaccharide, that generates a specific immune response and induces the formation of a specific antibody or specially sensitized T cells or both. 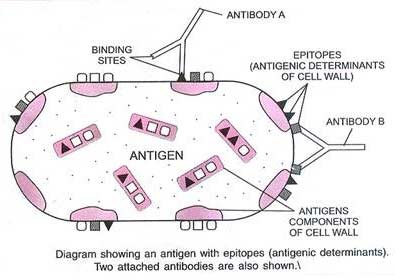 Although all antigens are recognized by specific lymphocytes or by antibodies, only some antigens are capable of activating lymphocytes. Molecules that stimulate immune responses are called Immunogens.

Epitope is immunologically active regions of an immunogen (or antigen) that binds to antigen-specific membrane receptors on lymphocytes or to secreted antibodies. It is also called antigenic determinants.

Autoantigens, for example, are a person’s own self antigens. Examples: Thyroglobulin, DNA, Corneal tissue, etc.

Alloantigens are antigens found in different members of the same species (the red blood cell antigens A and B are examples).

Adjuvants are substances that are non-immunogenic alone but enhance the immunogenicity of any added immunogen.

C. Nucleic Acids
Nucleic acids are usually poorly immunogenic. However, they may become immunogenic when single stranded or when complexed with proteins.

D. Lipids
In general lipids are non-immunogenic, although they may be haptens.

On the basis of immune response

The whole antigen does not evoke immune response and only a small part of it induces B and T cell response.

The small area of chemical grouping on the antigen molecule that determines specific immune response and reacts specifically with antibody is called an antigenic determinant.

Immunogenicity is determined by: 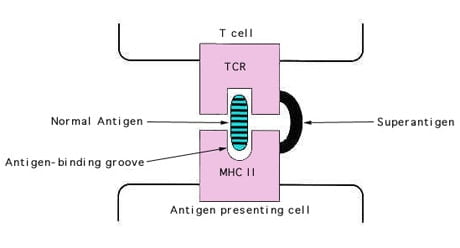 4 thoughts on “Antigen- Properties, Types and Determinants of Antigenicity”