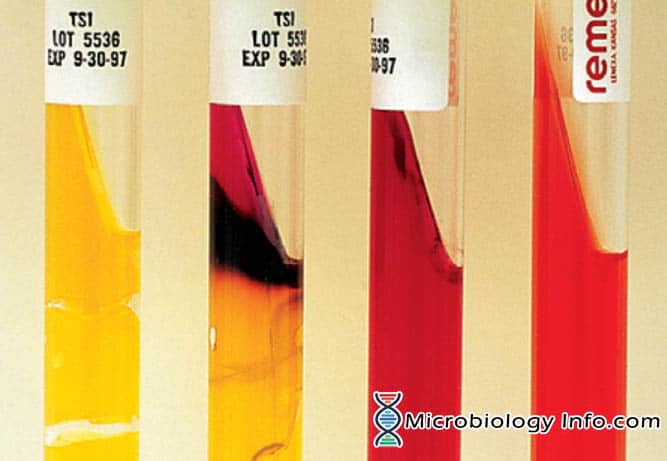 The Triple Sugar Iron (TSI) test is a microbiological test named for its ability to test a microorganism’s ability to ferment sugars and to produce hydrogen sulfide. An agar slant of a special medium with multiple sugars constituting a pH-sensitive dye (phenol red), 1% lactose, 1% sucrose, 0.1% glucose, as well as sodium thiosulfate and ferrous sulfate or ferrous ammonium sulfate is used for carrying out the test. All of these ingredients when mixed together and allowed solidification at an angle result in a agar test tube at a slanted angle. The slanted shape of this medium provides an array of surfaces that are either exposed to oxygen-containing air in varying degrees (an aerobic environment) or not exposed to air (an anaerobic environment) under which fermentation patterns of organisms are determined.

To determine the ability of an organism to ferment glucose, lactose, and sucrose, and their ability to produce hydrogen sulfide.

To facilitate the observation of carbohydrate utilization patterns, TSI Agar contains three fermentative sugars, lactose and sucrose in 1% concentrations and glucose in  0.1% concentration. Due to the building of acid during fermentation, the pH falls. The acid base indicator Phenol red is incorporated for detecting carbohydrate fermentation that is indicated by the change in color of the carbohydrate medium from orange red to yellow in the presence of acids.  In case of oxidative decarboxylation of peptone, alkaline products are built and the pH rises. This is indicated by the change in colour of the medium from orange red to deep red. Sodium thiosulfate and ferrous ammonium sulfate present in the medium detects the production of hydrogen sulfide and is indicated by the black color in the butt of the tube.

To facilitate the detection of organisms that only ferment glucose, the glucose concentration is one-tenth the concentration of lactose or sucrose. The meagre amount of acid production in the slant of the tube during glucose fermentation oxidizes rapidly, causing the medium to remain orange red or revert to an alkaline pH. In contrast, the acid reaction (yellow) is maintained in the butt of the tube since it is under lower oxygen tension.

After depletion of the limited glucose, organisms able to do so will begin to utilize the lactose or sucrose. To enhance the alkaline condition of the slant, free exchange of air must be permitted by closing the tube cap loosely.