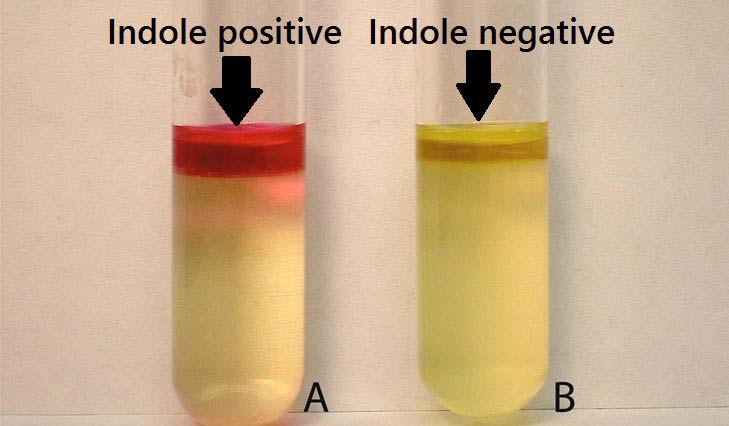 This test demonstrate the ability of certain bacteria to decompose the amino acid tryptophane to indole, which accumulates in the medium. Indole production test is important in the identification of Enterobacteria. Most strains of E. coli, P. vulgaris, P. rettgeri, M. morgani and Providencia species break down the amino acid tryptophan with the release of indole. This is performed by a chain of a number of different intracellular enzymes, a system generally referred to as “tryptophanase.” It is used as part of the IMViC procedures,a tests designed to distinguish among members of the family Enterobacteriaceae.

A variation on this test using Ehrlich’s reagent (using ethyl alcohol in place of isoamyl alcohol, developed by Paul Ehrlich) is used when performing the test on non-fermenters and anaerobes.

Tryptophan is an amino acid that can undergo deamination and hydrolysis by bacteria that express tryptophanase enzyme. Indole is generated by reductive deamination from tryptophan via the intermediate molecule indolepyruvic acid. Tryptophanase catalyzes the deamination reaction, during which the amine (-NH2) group of the tryptophan molecule is removed. Final products of the reaction are indole, pyruvic acid, ammonium (NH4+) and energy. Pyridoxal phosphate is required as a coenzyme.

When indole is combined with Kovac’s Reagent (which contains hydrochloric acid and p-dimethylaminobenzaldehyde in amyl alcohol) the solution turns from yellow to cherry red. Because amyl alcohol is not water soluble, the red coloration will form in an oily layer at the top of the broth.

In the spot test, indole combines, in the filter paper matrix, at an acid pH with p-Dimethylaminocinnamaldehyde (DMACA) to produce a blue to blue-green compound. Indole Spot Reagent has been reported to be useful in detecting indole production by members of the family Enterobacteriaceae and certain anaerobic species.

* Adjusted and/or supplemented as required to meet performance criteria.