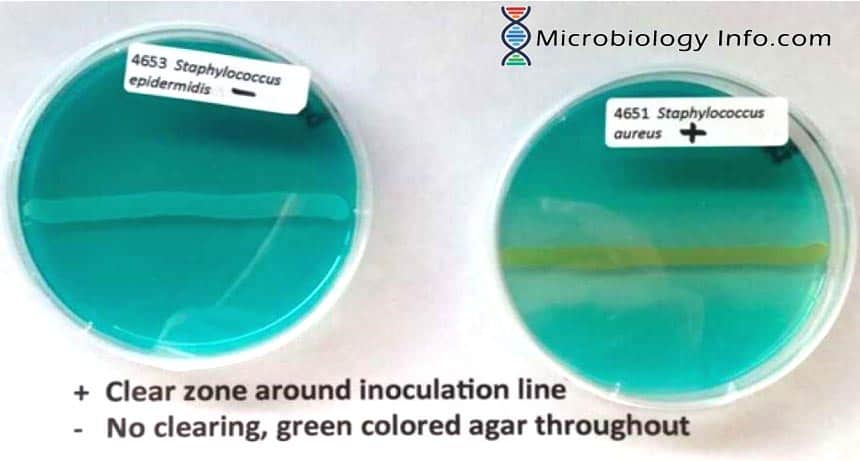 Deoxyribonucleic acid (DNA) is a large polymer of nucleotides that is way too large to enter the cell membrane. In order to utilize external DNA, bacteria cells secrete exoenzymes (DNases) outside of the cell that hydrolyze DNA into nucleotides.  The nucleotides can then move across the cell membrane via transport proteins to be utilized. The cell can use nucleotides to make nucleic acids and to use as a source of nitrogen, phosphate and carbon. Extracellular DNases have been reported in a relatively small subset of prokaryotes, including a number of human pathogens. DNA hydrolysis is tested by growing an organism on a DNase Test Agar plate (providing nutrients and DNA) and then checking the plate for hydrolysis. DNA Hydrolysis test or Deoxyribonuclease (DNase) test is thus used to determine the ability of an organism to hydrolyze DNA and utilize it as a source of carbon and energy for growth. It helps in the detection of deoxyribonuclease activity of bacteria and fungi, and especially for identification of pathogenic Staphylococci.

To differentiate organisms based on the production of deoxyribonuclease.

The test is used to determine the ability of an organism to hydrolyze DNA. DNase agar is a differential medium that tests the ability of an organism to produce an exo-enzyme, called deoxyribonuclease. DNase are extracellular endonucleases that cleave DNA and release free nucleotides and phosphate. DNase agar contains nutrients for the bacteria, DNA, and mostly methyl green as an indicator.  Methyl green is a cation which binds to the negatively-charged DNA.

Deoxyribonuclease allows the organisms that produce it to break down DNA into smaller fragments. When the DNA is broken down, it no longer binds to the methyl green, and a clear halo will appear around the areas where the DNase-producing organism has grown.

In DNase agar without indicator, the hydrolysis of DNA is observed by a clearing of the agar after addition of HCL (oligonucleotides dissolves in acid but DNA salts are insoluble). The acid precipitates unhydrolyzed DNA making the medium opaque. Therefore, DNase producing colonies hydrolyze DNA and produce a clear zone around the growth.

In DNase agar without indicators: