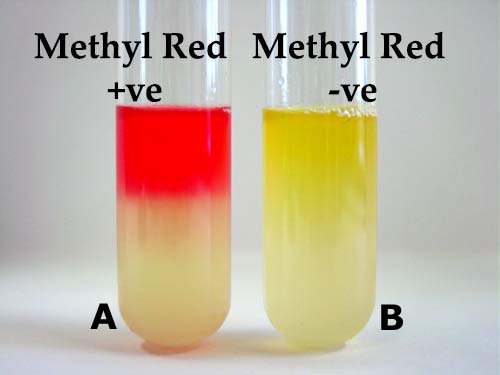 The methyl red (MR) test detects the production of sufficient acid during the fermentation of glucose and the maintenance of conditions such that the pH of an old culture is sustained below a value of about 4.5, as shown by a change in the color of the methyl red indicator which is added at the end of the period of incubation.

Clark and Lubs developed MR-VP Broth which allowed both the MR and VP tests to be performed from the same inoculated medium by aliquoting portions to different tubes.

Some bacteria have the ability to utilize glucose and convert it to a stable acid like lactic acid, acetic acid or formic acid as the end product.

These bacteria initially metabolise glucose to pyruvic acid, which is further metabolized through the ‘mixed acid pathway to produce the stable acid. The type of acid produced differs from species to species and depends on the specific enzymatic pathways present in the bacteria. The acid so produced decreases the pH to 4.5 or below, which is indicated by a change in the color of methyl red from yellow to red.

In the methyl red test (MR test), the test bacteria is grown in a broth medium containing glucose. If the bacteria has the ability to utilise glucose with production of a stable acid, the color of the methyl red changes from yellow to red, when added into the broth culture.

The mixed acid pathway gives 4 mol of acidic products (mainly lactic and acetic acid), 1 mol of neutral fermentation product (ethanol), 1 mol of CO2, and 1 mol of H2 per mol of glucose fermented. The large quantity of acids produced causes a significant decrease in the pH of the culture medium.

A weak positive is red-orange. If an orange color is seen, incubate the remainder of the broth for up to 4 days and repeat the test after further incubation. In this case it may also be helpful to set up a duplicate broth at 25C.

Originally the paired MR-VP tests were used to distinguish between members of the family Enterobacteriaceae, but now they are used to characterize other groups of bacteria including Actinobacteria.