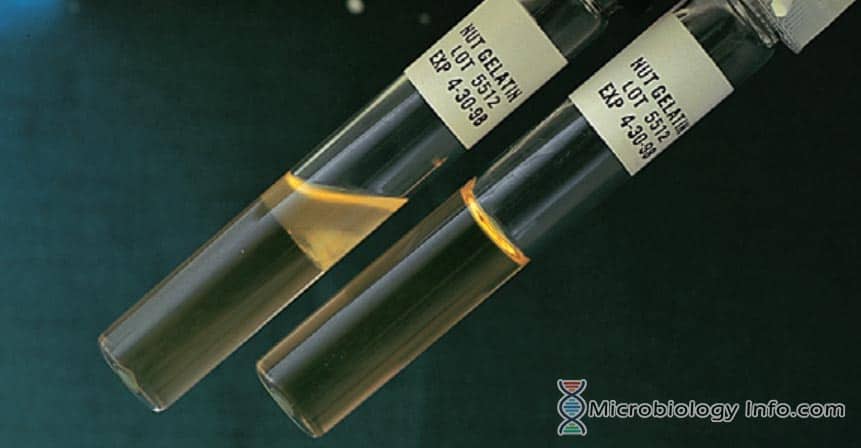 Gelatin is a protein derived from the connective tissues of vertebrates, that is, collagen. It is produced when collagen is boiled in water. Gelatin hydrolysis detects the presence of gelatinases. Gelatinases are proteases secreted extracellularly by some bacteria which hydrolyze or digest gelatin. The production of gelatinases is used as a presumptive test for the identification of various organisms, including Staphylococcus sp., Enterobacteriaceae, and some gram-positive bacilli.

This test is used to determine the ability of an organism to produce extracellular proteolytic enzymes (gelatinases) that liquefy gelatin, a component of vertebrate connective tissue.

The reaction occurs in two sequential steps: in first reaction gelatinases hydrolyze gelatin into polypeptides and then polypeptides are further converted into amino acids. The amino acid is taken up by the cell and used for metabolic purposes.

The presence of gelatinases is detected using a nutrient gelatin medium. When an organism produces gelatinase, the enzyme liquefies the growth medium by hydrolyzing gelatin present in the medium.

There are several methods for determining gelatinase production, all of which make use of gelatin as the substrate. The standard and most commonly employed method is the nutrient gelatin stab method.

Gelatin hydrolysis. A, Positive; note liquefaction at top of tube. B, Uninoculated tube. 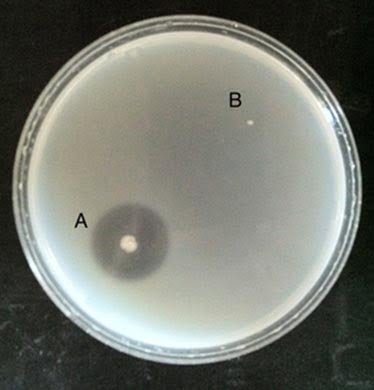 Gelatin hydrolysis. A, Positive B, Negative