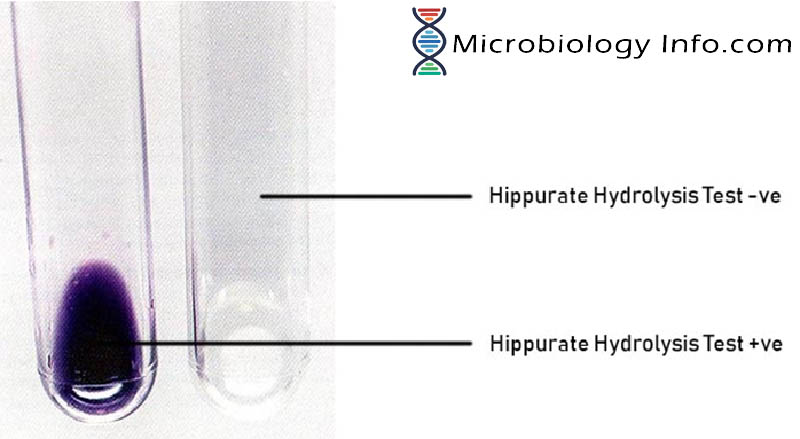 Hippurate hydrolysis test is used to detect the ability of bacteria to hydrolyse substrate hippurate into glycine and benzoic acid by action of hippuricase enzyme present in bacteria.

Hippuricase is a constitutive enzyme that hydrolyzes the substrate hippurate to produce the amino acid glycine. Glycine is detected by oxidation with Ninhydrin reagent, which results in the production of a deep purple color.

Hippurate hydrolysis test is used in the presumptive identification of Gardnerella vaginalis, Campylobacter jejuni, Listeria monocytogenes and group B streptococci by detecting the ability of the organism to hydrolyze hippurate.

To detect the production of the enzyme hippuricase for the presumptive identification of a variety of microorganisms.

Hippurate is the glycine conjugate of benzoic acid.  When hippurate is hydrolysed by an organism glycine and benzoic acid are formed. Glycine is deaminated by the oxidizing agent ninhydrin, which is reduced during the process. The end products of the ninhydrin oxidation react to form a purple-colored product.