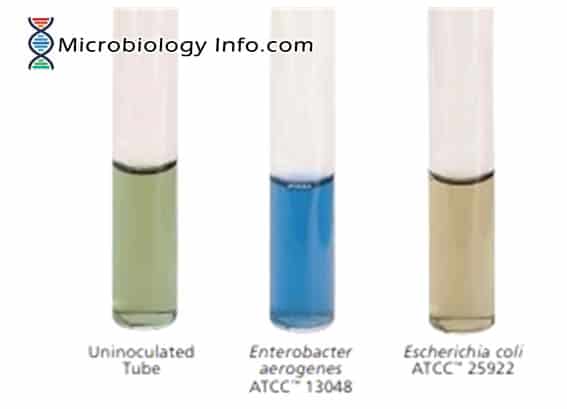 Malonate test is a colorimetric test of the ability of bacteria to use malonate as a source of carbon, the endpoint of which is the production of alkaline metabolites that induce a color change.

An organism that simultaneously can utilize sodium malonate as its carbon source and ammonium sulfate as its nitrogen source produces an alkalinity due to the formation of sodium hydroxide. This results in an alkaline reaction which in a medium containing malonate, changes the indicator (bromothymol blue) from its original green color to light blue or Prussian blue. Organisms which cannot utilize malonate and ammonium sulfate and do not ferment dextrose produce no color change. Organisms which are malonate-negative but do ferment dextrose result in the development of a yellow color due to increased acidity in the medium.

In the lab, an inoculum from a pure culture is transferred aseptically to a sterile tube of malonate broth. The inoculated tube is incubated at 35-37 C for 24 hours and the results are determined. Abundant growth and a change from green to blue in the medium indicates a positive test for growth using malonate. Hence, if a microbe can use malonate for carbon and energy, it will grow on malonate broth. The use of malonate leads to a rise in pH of the medium, and a pH indicator changes color.

The medium used is malonate broth. Malonate Broth, prepared according to the formula described by Leifson, is a liquid medium containing ammonium sulfate as the only source of nitrogen and malonate as the only source of carbon .It contains mineral salts, sodium citrate for carbon, and ammonium phosphate for its nitrogen source. The pH indicator is brom thymol blue, which is green at neutral pH, yellow at acidic pH <6.0 and turns blue at alkaline (basic) pH >7.6.