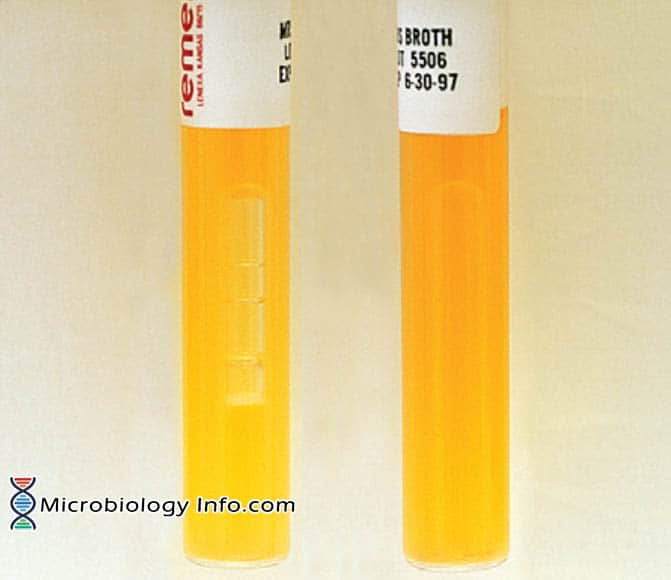 The MRS formulation was developed by de Man, Rogosa and Sharpe to replace a variable product (tomato juice) and, at the same time, provide a medium which would support good growth of lactobacilli in general. Hence, MRS agar and broth given to their superiority are commonly employed for culturing and identifying of Lactic acid bacteria especially the Lactobacillus spp.

They are Gram-positive, catalase and oxidase negative and are fastidious in their nutritional requirements. Growth is enhanced considerably by microaerobic conditions.

MRS medium is selective for lactobacilli but some growth of leuconostocs and pediococci may occur. Selectivity can be altered by pH adjustment. Lactobacilli will tolerate lower pH levels than streptococci (pH 5.0-6.5) with pediococci and leuconostocs growing best within this range.

To determine whether an organism forms gas during glucose fermentation.

The MRS broth contains sources of carbon, nitrogen, and vitamins to support the growth of lactobacilli and other organisms. Enzymatic Digest of Animal Tissue, Beef Extract, and Yeast Extract are the carbon, nitrogen, and vitamin sources used to satisfy general growth requirements in Lactobacilli MRS Broth. Dextrose is the fermentable carbohydrate. Sodium Acetate is an inhibitory agent. Sodium Acetate and Ammonium Citrate act as selective agents as well as energy sources. Potassium Phosphate is the buffering agent. Magnesium Sulfate and Manganese Sulfate provide cations used in metabolism. Polysorbate 80 is a surfactant, facilitating uptake of nutrients by lactobacilli.

When an organism is inoculated into the broth medium, those that are able to ferment the dextrose sugar, overcome the selective agents and utilize other nutrients provided show luxuriant growth which is considered a positive result. Some organism may also be able to produce gas for which a Durham tube may be placed to differentiate such gas-producers from the rest of the orgnaisms (eg. Leuconostoc sp. from Lactobacillus spp.).

B, Positive: growth, no gas production by Lactobacillus sp.(Right)