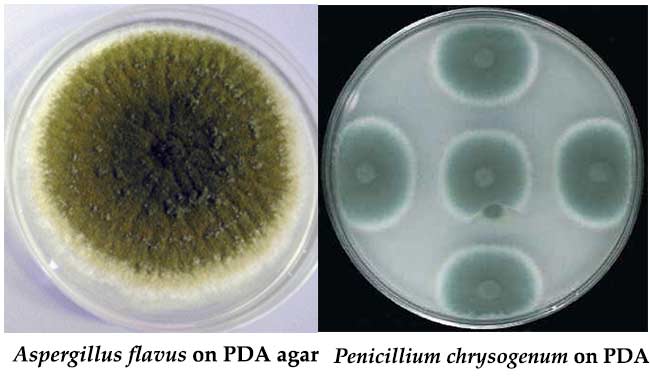 Potato Dextrose Agar (PDA) is used for the cultivation of fungi. Potato Dextrose Agar (PDA) is a general purpose medium for yeasts and molds that can be supplemented with acid or antibiotics to inhibit bacterial growth. It is recommended for plate count methods for foods, dairy products and testing cosmetics. PDA can be used for growing clinically significant yeast and molds. The nutritionally rich base (potato infusion) encourages mold sporulation and pigment production in some dermatophytes.

Potato Dextrose Agar is composed of dehydrated Potato Infusion and Dextrose that encourage luxuriant fungal growth. Agar is added as the solidifying agent. Many standard procedures use a specified amount of sterile tartaric acid (10%) to lower the pH of this medium to 3.5 +/- 0.1, inhibiting bacterial growth. Chloramphenicol acts as a selective agent to inhibit bacterial overgrowth of competing microorganisms from mixed specimens, while permitting the selective isolation of fungi.

Note: Do not reheat the acidified medium, heating in the acid state will hydrolyze the agar.

After sufficient incubation, isolated colonies should be visible in the streaked areas and confluent growth in areas of heavy inoculation.

Aspergillus flavus: Powdery masses of yellow-green spores on the upper surface and reddish-gold on the lower surface.

Penicillium chrysogenum: Olivaceous green with sterile white margin on the upper surface and Orange to red, wrinkled on the lower surface.