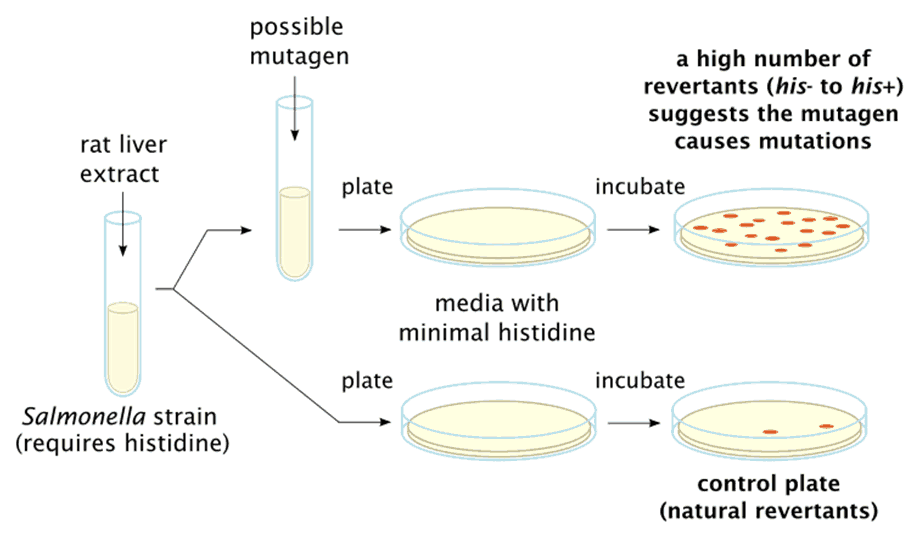 Ames test it is a biological assay to assess the mutagenic potential of chemical compounds. It utilizes bacteria to test whether a given chemical can cause mutations in the DNA of the test organism. The test was developed by Bruce N. Ames in 1970s to determine if a chemical at hand is a mutagen.

To determine the mutagenic activity of chemicals by observing whether they cause mutations in sample bacteria.

A sample’s mutagenic potential is assessed by exposing amino acid-requiring organisms to varying concentrations of chemical and selecting for the reversion event. Media lacking the specific amino acid are used for this selection which allow only those cells that have undergone the reversion to histidine / tryptophan prototrophy to survive and grow. If the test sample causes this reversion, it is a mutagen.

I ) Isolate an auxotrophic strain of Salmonella Typhimurium for histidine. (ie. His-ve)

Note: small amount of histidine is required so bacteria starts growing. Once histidine is depleted only those bacteria mutated to gain the ability to synthesize histidine form colonies.

IV)  Incubate the suspensions at 37°C for 20 minutes

V) Prepare the two agar plate and spread the suspension on agar plate.

VII) After48 hours count the number of colonies in each plate.

While Ames test is used to identify the revert mutations which are present in strains, it can also be used to detect the mutagenicity of environmental samples such as drugs, dyes, reagents, cosmetics, waste water, pesticides and other substances which are easily solubilized in a liquid suspension.