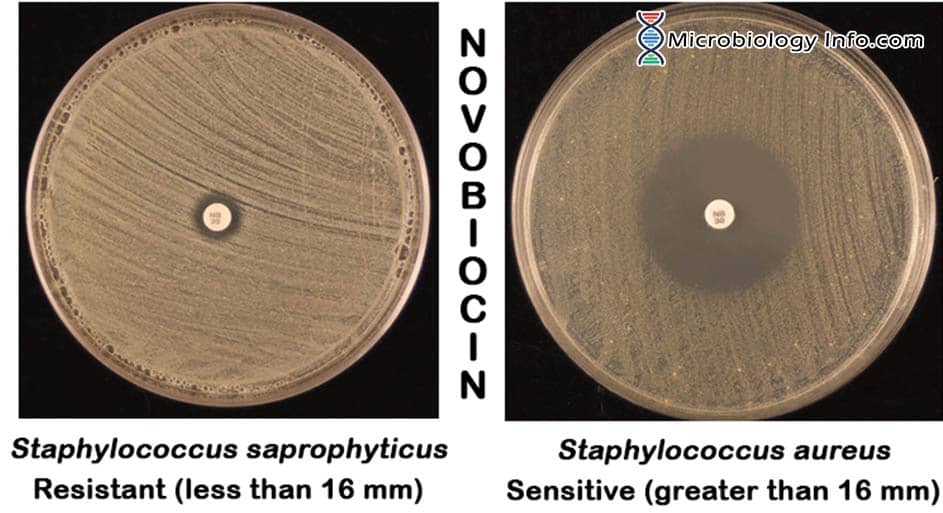 Novobiocin is an aminocoumarin antibiotic, produced by the actinomycete Streptomyces nivens, with antibacterial property. In 1975, Kloos and Schleifer reported a simplified scheme for differentiating coagulase-negative Staphylococcus spp. which included a novobiocin disk test. Staphylococcus saprophyticus, a gram positive coagulase negative Staphylococci, is an uropathogenic bacterium that causes acute uncomplicated urinary tract infections, particularly in young, middle aged female patients. Unlike most other CONS, saprophyticus is rarely resistant to most antibiotics active against gram-positive organisms. S. saprophyticus is innately resistant to the antibiotic novobiocin. Therefore, screening coagulase-negative staphylococci from urine cultures for novobiocin resistance is a reliable presumptive identification of saprophyticus.

To determine the susceptibility pattern of bacterium to antibiotic novobiocin.

Novobiocin is an antibiotic interfering with the unpackaging and repackaging of DNA during DNA replication and the bacterial cell cycle. Novobiocin binds to DNA gyrase, and blocks adenosine triphosphatase (ATPase) activity. Susceptibility to novobiocin is determined by placing a novobiocin-impregnated paper disk on a agar plate seeded with the organism under investigation. As the organism multiplies during incubation to produce a lawn of confluent growth, cells are exposed to the antibiotic diffusing into the agar from the paper disk. If the bacteria are susceptible to novobiocin, there will be a formation of visible zone of inhibition around the disk, representing an area where the antibiotic concentration has prevented bacterial growth. No zone of inhibition around the disk represents that organism is resistant to the anitibiotic.