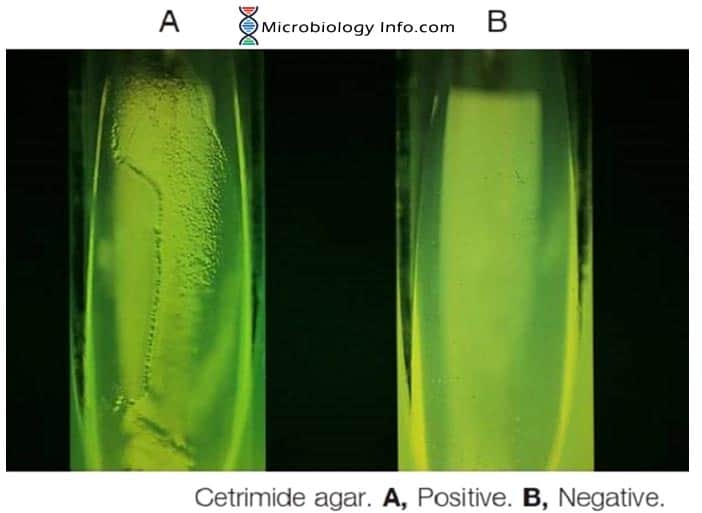 Cetrimide is a quaternary ammonium salt, which acts as a selective agent and inhibits most bacteria by acting as a cationic detergent (Cetyltrimethylammonium bromide).

Cetrimide when added into a culture medium results into a selective solid medium recommended for use in qualitative procedures for selective isolation and presumptive identification of Pseudomonas aeruginosa and other nonfermentative, gram-negative bacilli.

To isolate and purify Pseudomonas aeruginosa from contaminated specimens.

The test is used to determine the ability of an organism to grow in the presence of cetrimide, a toxic substance that inhibits the growth of many bacteria by causing the release of nitrogen and phosphorous, which slows or kills the organism. Pseudomonas aeruginosa and very few other organisms are resistant to cetrimide. Pseudomonas aeruginosa produces a number of water soluble iron chelators, including the yellow-green or yellow-brown fluorescent pyoverdin. When pyoverdin combines with the water-soluble pyocyanin, the bright green colour characteristic of Pseudomonas aeruginosa is created.

A culture medium containing 0.03% cetrimide is employed for the detection of organisms and especially Pseudomonas aeruginosa. Organisms resistant to cetrimide withstand its germicidal activity resulting in growth which is observed on the inoculated slant of the agar medium.

Fluorescein Production (requires the use of ultraviolet light):