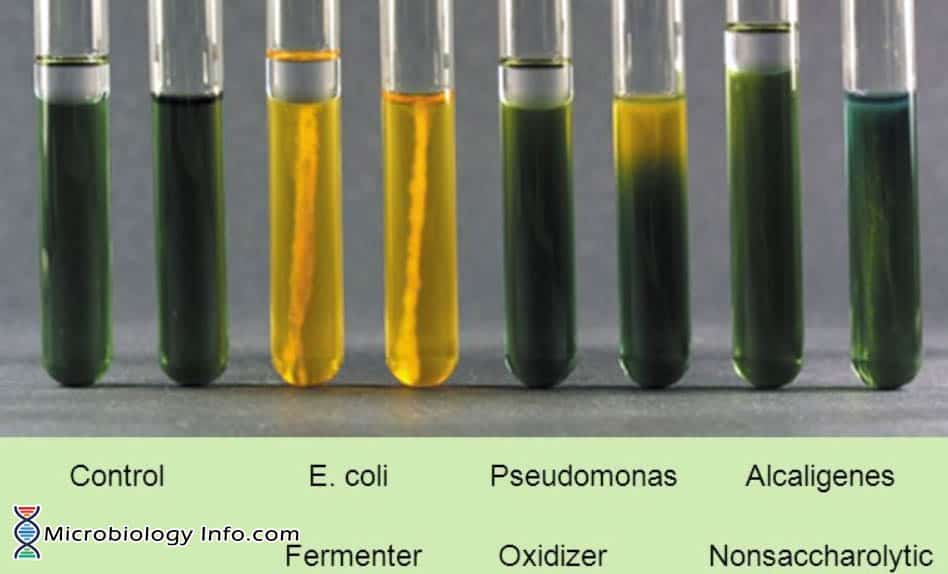 Carbohydrates are organic molecules that contain carbon, hydrogen and oxygen in the ratio (CH2O)n. Organisms use carbohydrate differently depending upon their enzyme complement.

The pattern of fermentation is characteristics of certain species, genera or groups of organisms and for this reason this property has been extensively used as method for biochemical differentiation of microbes.

To detect the oxidation or fermentation of carbohydrates by bacteria.

Whether an organism is oxidative or fermentative can be determined by using Hugh and Leifson’s medium, commonly called as OF medium which contain tryptone and bromothymol blue (an indicator). One of the sugars, such as glucose, xylose, mannitol, lactose, sucrose, and maltose is added to the medium which serves as the fermentable carbohydrate.

An organism is inoculated to two tubes of each OF Medium. Once inoculated, one tube is overlaid with mineral oil or melted paraffin producing an anaerobic environment. The other tube is left open to the air. Growth of microorganisms in this medium is either by utilizing the tryptone which results in an alkaline reaction (dark blue colour) or by utilizing glucose, which results in the production of acid (turning  bromothymol blue to yellow).