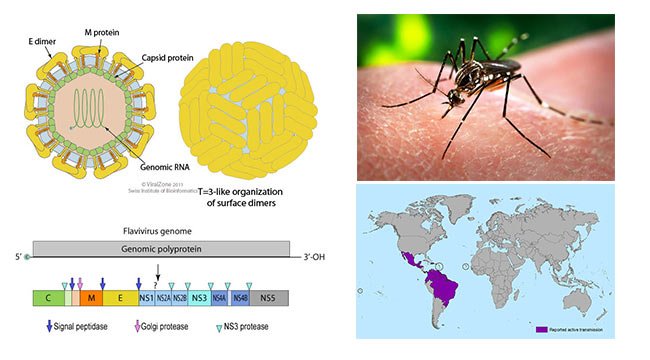 Zika Virus (ZIKV) is mosquito-borne emerging flavivirus which was first identified in Zika Forest of Uganda in 1947 in rhesus monkeys. It was later identified in humans in 1968 for the first time in Nigeria. Different outbreaks of Zika virus disease have been recorded in Africa, the Americas, Asia and the Pacific. Its infection is caused by the bite of an infected Aedes mosquito, usually causing mild fever, rash, conjunctivitis, and muscle pain. In Brazil in May 2015, the Pan American Health Organization (PAHO) issued an alert regarding the first confirmed Zika virus infections.

These symptoms are mild and usually last for 2-7 days.

Symptoms are similar to that of dengue or chikungunya.

Countries and territories with active Zika virus transmission as of Jan 2016.

Since November, Brazil has seen nearly 4,000 cases of microcephaly in babies born to women who were infected with Zika during their pregnancies.

PCR: It is useful in the first 3-5 days after the onset of symptoms. It helps in the direct detection of Zika virus RNA or specific viral antigens in clinical specimens.

Serology Test: It detect the presence of antibodies but are useful only after five days.

There is no specific treatment or vaccine currently available.

Prevention and Control of Zika Virus