Antibody (Ab) also know as Immunoglobulin (Ig) is the large Y shaped protein produced by the body’s immune system when it detects harmful substances, called antigens like bacteria and viruses. The production of antibodies is a major function of the immune system and is carried out by a type of white blood cell called a B cell (B lymphocyte), differentiated B cells called plasma cells. The produced antibodies bind to specific antigens express in external factors and cancer cells.

There are four polypeptide chains: two identical heavy chains and two identical light chains connected by disulfide bonds. Light Chain (L) consists polypeptides of about 22,000 Da and Heavy Chain (H) consists larger polypeptides of around 50,000 Da or more. There are five types of Ig heavy chain (in mammal) denoted by the Greek letters: α, δ, ε, γ, and μ. There are two types of Ig light chain (in mammal), which are called lambda (λ) and kappa (κ).

Each heavy and light chain in an immunoglobulin molecule contains an amino-terminal variable (V) region that consists of 100 to 110 amino acids and differ from one antibody to another. The remainder of each chain in the molecule – the constant (C) region exhibits limited variation that defines the two light chain subtypes and the five heavy chains subclasses. Some heavy chains (α, δ, γ) also contain a proline-rich hinge region. The amino terminal portions, corresponding to the V regions, bind to antigen; effector functions are mediated by the carboxy-terminal domains. The ε and μ heavy chains, which lack a hinge region, contain an additional domain in the middle of the molecule. CHO denotes a carbohydrate group linked to the heavy chain.

Serum containing antigen-specific antibodies is called antiserum. The 5 types – IgG, IgM, IgA, IgD, IgE – (isotypes) are classified according to the type of heavy chain constant region, and are distributed and function differently in the body. 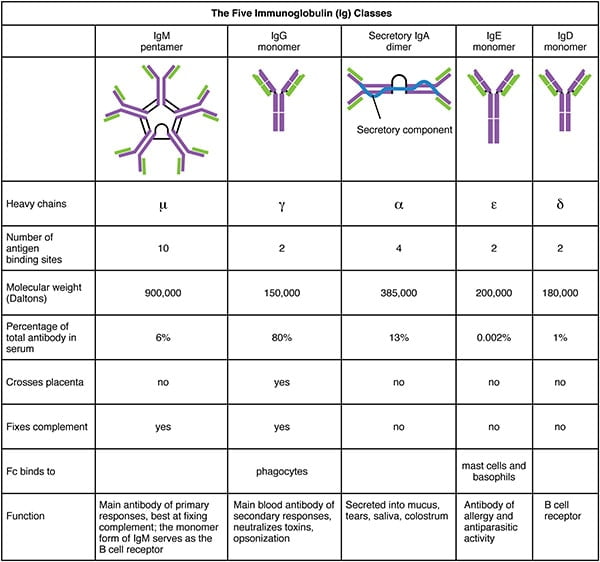